Political Philosophy Pierre Joseph Proudhon: One cannot give and keep at the same time 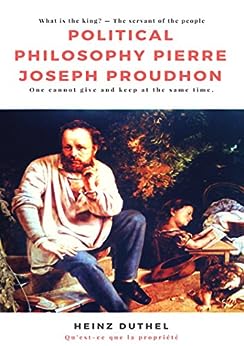 "the Action Française…from its inception regarded the author of La philosophie de la misère as one of its masters. He was given a place of honour in the weekly section of the journal of the movement entitled, precisely, 'Our Masters.' Proudhon owed this place in L'Action française to what the Maurrassians saw as his antirepublicanism, his anti-Semitism, his loathing of Rousseau, his disdain for the French Revolution, democracy, and parliamentarianism: and his championship of the nation, the family, tradition, and the monarchy."
Proudhon's thought has seen some revival since the end of the Cold War and the fall of "real socialism" in the Eastern Bloc. It can be loosely related to modern attempts at direct democracy. The Groupe Proudhon, related to the Fédération Anarchiste (Anarchist Federation), published a review from 1981 to 1983 and again since 1994. (The first period corresponds with the 1981 election of Socialist candidate François Mitterrand and the economic liberal turn of 1983 taken by the Socialist government.) It is staunchly anti-fascist and related to the Section Carrément Anti Le Pen which opposes Jean-Marie Le Pen). English-speaking anarchists have also attempted to keep the Proudhonian tradition alive and to engage in dialogue with Proudhon's ideas: Kevin Carson's mutualism is self-consciously Proudhonian, and Shawn P. Wilbur has continued both to facilitate the translation into English of Proudhon's texts and to reflect on their significance for the contemporary anarchist project.
Pierre-Joseph Proudhon (15 January 1809 in Besançon – 19 January 1865 in Passy) was a French politician, mutualist philosopher and socialist. He was a member of the French Parliament, and he was the first person to call himself an anarchist. He is considered among the most influential of anarchist writers and organisers. After the events of 1848 he began to call himself a federalist.