The End of the American Dream . Spy vs. Spy: The end of American history begins in America (English Edition) 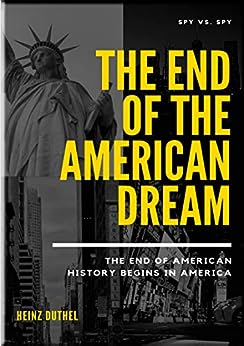 The End of the American Dream
The end of American history begins in America
Spy vs. Spy

America's aggressions around the globe have now come full circle and boomeranged into its domestic affairs.

•Therefore, good Brutus, be prepared to hear.
•And since you know you cannot see yourself
•So well as by reflection, I, your glass,
•Will modestly discover to yourself
•That of yourself which you yet know not of.
•Cassius, in Shakespeare's Julius Cesare (Act 1 Scene 2)

"The era of US dominion has now passed," Bacevich observes, "So Americans can no longer afford to indulge in the fiction of their indispensability, cherished in elite circles […] Subordinating the wellbeing of the American people to ostensible imperatives of global leadership – thereby allowing racism, inequality and other problems to fester at home – has become intolerable."

What Bacevich outlines in this crucial essay is a constellation of facts – of racism and poverty at home and pathetic and dysfunctional attempts at world domination – that much of the world and in fact, most Americans themselves have known, but which today, during the presidency of Donald Trump and this criminally negligent handling of the COVID-19 pandemic, has been thrown into stark relief.

Was this America ever a leader or just a bully? Did it ever have the moral authority to shepherd a terrorised Earth?

America as an experiment is failing. Perhaps it was destined to fail from its very beginning. An idea that began with the genocide of Native Americans, thrived on the sustained course of African slavery, extended its genocidal and racist foregrounding to generations of immigrants who came to its shores to toil and suffer so that the white supremacist settler colonists prosper and enrich generations after generations, had to pay for its continued sins at some point.